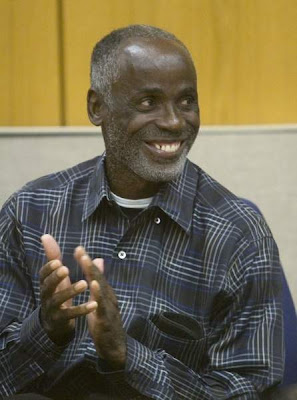 Wherever you stand on the death penalty you have to believe that the state should be as sure as possible that people on death row are guilty.That means DNA testing should be routine whenever it might establish guilt or innocence.

James Bain, convicted and sentenced to death for the 1974 rape of a 9-year-old Polk County boy, was turned down four times for DNA testing to see if semen found on the boy’s shorts could have been Bain’s.

Finally, an appeals court overturned the denial of his fifth appeal. Thursday, Bain was released after serving 35 years for a crime he did not commit. The victim had identified him as the attacker, but DNA testing showed he could not have been the rapist.

It’s hard to imagine how DNA testing could be withheld at this point. Some 248 people have been exonerated now by DNA testing, including 10 others in Florida and 17 on death rows around the country, according to The Innocence Project, which helped Bain.

Public support for the death penalty, as well as its actual use, have been declining, in part because of doubts raised by DNA.

We still believe the ultimate penalty is appropriate in the worst cases.

But if Florida and other states fail to fund and expedite DNA testing in death cases, no matter how old, support for capital punishment will continue to erode—and deservedly so.

This is becoming a serious issue. It seems there's an exoneration every month. When will Chain Gang Charlie appoint a commission to evaluate the problem? Doesn't Texas have an Innocence Commission? It's not just the Pre-DNA cases, the John Preston stuff shows there's been bungled prosecutions all over the place.

When common sense and competence are eroded from law and leadership, citizens flounder in a cesspool of injustice. Regardless of anyone’s opinion of CP as a sentence, the reality that one Floridian was subjected to the most heinous injustice, resulting from either human error or corruption should result in a CP cease fire asap.

The America that I studied in civics class wouldn’t tolerate one travesty. The America that I fought for in WWII wouldn’t risk killing an innocent. It would be very capable of locking down truly guilty offenders for life without parole.

With Mr. Bain’s exoneration, we have proof of yet another who endured the ultimate. Until the public makes the connection between the ongoing pattern of massive statewide corruption, acknowledged by the Crist and SC justices, and more than 24 innocents since 1973 being convicted, Floridians will continue to pay in all ways for crime.

1. $ for faulty investigation
2. $ for false prosecution
3. $ for endless appeals, judges, prosecutors and public defenders
4. $ for “corrections”
5. $ when exonerees are set free, $50K per lost year
6. Beyond $ for real offender never being captured

Maybe one day my “Son,” provably innocent Paul William Scott, will be as blessed as Mr. Bain was to have the truth set him free. When we visit Paul at Union Correctional we ponder the current state of “corrections” and as we wait through processing and then walk the long promenade (I’m 87) to meet Paul, we can't help but think there must be a better way because there certainly couldn’t be much worse.