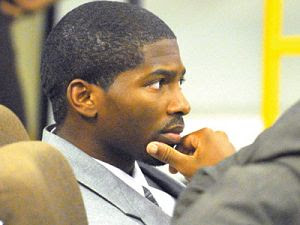 One of the most notorious murder trials in the Panhandle is now over.

Baker's mother and father addressed the court for the first time today.Convicted killer Wesley Williams walked into Friday's courtroom with the same attitude he's displayed throughout the whole trial. He even managed to crack a smile while a prison guard took his fingerprints. But there was nothing funny about Friday's sentencing, which the victim's family had waited to see for four long years.

"It's really been hard for our family, the entire family has been affected, the whole community has been affected by this crime." LeVaughn Baker told the court how he will never have a chance to be a grandfather to Amad, Amarion and Aaron Baker. Two months ago, a jury found Wesley Williams guilty for the March 17, 2005 murders of 19-year-old Danielle Baker and her three sons. Baker was shot in the head while the boys suffocated to death from duct tape.

"It was so cruel what happened to my babies. Cruel is really not the word to say what happened to them." Baker's mother, Doreen Jackson, says she tried to give Williams the benefit of the doubt.

"I sat here everyday, and I listened and I watched. And I came to my conclusion: he was guilty, he was guilty from day one." Jackson then explained to the court why she didn't want the death penalty.

"If we don't find out who the other people are, it's okay with me. You hold it in and you sit in your bed and you lay in it. But I do want him to live, I want him to realize what he's done." Circuit Judge William Wright even said he believed Williams deserved to die. However, while the evidence placed Williams at the murder scene, it didn't prove he actually committed the murders himself. "The crime in this case, the crime that was proven by the State, calls out for the death penalty. I cannot understand the actions that you took that night, they will never be explained to me."

Wright then sentenced him to the maximum penalty allowed under Florida law: four consecutive life sentences and three, 30-year terms for aggravated child abuse. "...count three as to first degree murder, I'm gonna sentence you to life in prison without being eligible for parole." But Public Defender Walter Smith says there's still no proof his client is guilty.

"Sometimes we overlook the first step which is we have to prove his involvement beyond a reasonable doubt before we even reach the issue of the penalty. And I don't think in this case, his involvement was ever proven."

Wesley Williams may never live life as a free man again. But he enters his prison sentence still holding onto the biggest secret of all: who else participated in killing Danielle Baker and her three boys? Smith says he's already in the process of appealing the case.