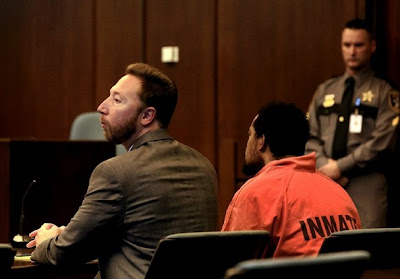 Naples — Mesac Damas, who is accused of killing his family in North Naples, appeared in court today.

It was the first appearance of Damas since he was apprehended in Haiti and brought back to the Collier County jail back in September.

Damas’ only communication came when Judge Frank Baker asked if he understood the meaning of the procedure.

Accused of cutting the throats of his wife and five young children in September, 33-year-old Mesac Damas could pay the ultimate price — death — if convicted of the killings.

If sentenced to death, Damas would be only the second Florida inmate on death row in a Collier County case.

Collier County Deputy Public Defender Mike Orlando, who represents Damas, filed a not-guilty plea in September and said at the time that he had concerns about his client’s mental state. When reached for comment Thursday, Orlando had little to say about the state’s decision to pursue the death penalty.

“I would have preferred that they had not filed that, but that’s what they chose to do,” Orlando said. “I understand that and will prepare accordingly.”

Detectives say that sometime between Sept. 17 and 18, Damas left work, returned to his North Naples townhouse and cut the throats of his wife, Guerline Dieu Damas, 32, and their five children. He then fled to his native Haiti, where he was later arrested and returned to the U.S.

Family members on both sides were tight-lipped when asked Thursday about the possibility of Damas receiving the death penalty.

“I don’t want to talk about this,” Damas’ father, Jean Damas Sr., said before closing the door at his Naples Manor home.

Mackindy Dieu, 24, Guerline’s brother who is listed as a witness in the case, said he is not allowed to discuss it. Guerline’s mother, Thelicia Medor, also declined comment.

However, earlier in the day, Medor, who does not speak English, had her 12-year-old granddaughter, Sabrina Obsaint, return a call to the Daily News. She said the family is not sold on the death penalty.

“We wanted to see him live and suffer the consequences in jail,” she said.

The decision to file for the death penalty means that Damas will receive a second attorney for his defense and that he’ll undergo a penalty phase if convicted. During the penalty phase, the same jury that convicted him would decide whether to recommend Damas receive life in prison or the death penalty. They would weigh aggravating factors with mitigating factors offered by the defense.

Aggravating factors are defined in Florida law and include acts that are “heinous, atrocious and cruel;” acts that are “cold, calculated and premeditated;” acts in which a victim is under the age of 12; and those in which the offender is the parent of the victim.

Furthermore, under Florida law, each individual killing counts as a prior violent felony to the next.

David A. Brener, a Fort Myers criminal defense attorney, said all the aggravators listed above may apply to Damas. He said one mitigating factor stands above all others:

“Clearly this gentlemen is ill,” he said.

And though insanity is a notoriously difficult standard to meet, mental illness can play a major role in the penalty phase, Brener explained.

“In other words the jury can find him legally sane but mentally ill and therefore not deserving of the death penalty,” he said.

A status check is slated for Damas in court this morning, though Orlando said he doesn’t “anticipate Mr. Damas will be there.”

According to the Florida Department of Corrections, there are 387 inmates on death row in Florida.

If sentenced to death, Damas would join Brandy Bain Jennings as the only inmates with Collier cases on death row. Jennings was sentenced to death for his role in a 1995 triple homicide and robbery at Collier County’s Cracker Barrel restaurant.

Thomas Lee Gudinas’ was sentenced to death in Collier County in 1995. However, his case was moved to Naples from Orlando due to extensive publicity. Gudinas killed a former homecoming queen near a downtown Orlando bar in 1994.

Raymond Koon was sentenced to death in Collier County in 1982 for gunning down a U.S. Secret Service informant. In 2005, at 73 years old, he died in prison of natural causes.

In 2003, John Ballard, a suspected serial killer and former Golden Gate resident, was sentenced to death for robbing and killing two neighbors. However, the Florida Supreme Court vacated Ballard’s two murder convictions and his death sentence in 2006. He was last believed to be living in California.
Posted by carie at 6:05 PM