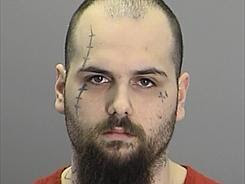 NEW PORT RICHEY, Fla. -- A Florida judge has declared a mistrial in the murder trial of a neo-Nazi whose tattoos were covered up for the courtroom by a state cosmetologist.

After deliberating for 10 hours Friday, jurors told Circuit Judge Michael Andrews they were deadlocked. Ten jurors believed John Allen Ditullio was not guilty, while two believed he was the masked man who fatally stabbed one person and injured another in a mobile home in 2006.

Ditullio has a large swastika, barbed wire and a vulgarity tattooed on his face and neck. Acting on a request by Ditullio's lawyer, Andrews ruled that the tattoos could sway a jury's opinion and ordered them covered.

Did you know that that you can generate money by locking selected pages of your blog or site?
Simply open an account on AdWorkMedia and run their content locking tool.