Couple's Killer Given To 2 Death Sentences 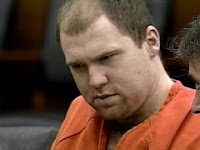 JACKSONVILLE, Fla. -- The man convicted of burying a Jacksonville couple alive two years ago was sentenced Wednesday to be put to death for his crimes.

Michael James Jackson, 25, was convicted in May of killing Carol and Reggie Sumner and the jury voted 8 to 4 to recommend the death penalty.

The pair was abducted, loaded into their car's trunk and forced to reveal financial information. Their bodies were later found buried in a shallow grave in a remote area in Charlton County, Ga., near the Florida state line.

Jackson was said to have used the Sumners' bank card and PIN number to withdraw money from their account and still had their financial records when he was arrested in South Carolina.

After hearing impact statements from the victims' children on Wednesday, Judge Michael Weatherby recounted the crime, said that Jackson was the ringleader of a group intent on robbing the Sumners, both 61 and disabled, then sentenced him to two death penalties.

Weatherby then sentenced Jackson to die by lethal injection.

The Sumners' family said the judge's decision brought them some closure.

"Like the judge said, Lord have mercy on his soul," said Reggie Sumner's sister Jean Clark. "It's very difficult. I feel for the families who have experienced this because it's a very difficult situation. I don't know what to say. How could anyone do something like this?"

"Michael Jackson started this ball rolling when he put this plan together, and Michael Jackson has earned the most serious punishment we can give him under the laws of the state of Florida," said prosecutor Jay Plotkin.

"He is very optimistic about his chances on appeal," Kuritz said of his client, adding it could take more than a year before the Florida Supreme Court hears oral arguments in the case.

He said his client was "absolutely baffled by the jury's verdict" and "disappointed by the recommendation of death."

Co-defendants testified Jackson led the robbery, but he maintained he only agreed to rob them. During interviews with police, he described the couple moaning while they were being buried.
Posted by carie at 11:35 AM