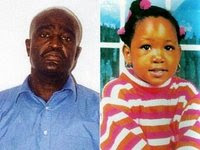 BY SUSANNAH A. NESMITH

When the clerk read the jury's recommendation Friday night, Harrell Braddy's 85-year-old mother began to sob, her shoulders shaking, her face contorted into a grimace of grief.

Braddy showed no reaction to the jury's pronouncement.

It was the same face he showed last month, when the jury convicted him of leaving a 5-year-old girl to the mercy of alligators in the Everglades.

Assistant State Attorney Abbe Rifkin had urged the jury in her closing arguments Friday to vote for the death penalty, arguing that Braddy's record and the way he made little Quatisha Maycock suffer before she died merited the ultimate punishment.

''What do we know about this defendant? We know he commits violent felonies,'' Rifkin told the jury.

''This is a guy who cannot live in the community without hurting someone,'' she said.

Braddy, who has been known for his outbursts in court, sat virtually emotionless throughout most of the trial.

The medical examiner testified that the little girl was still alive when one or more alligators bit her head and stomach.

In 1998, Braddy took the girl and her mother out of her mother's north Dade apartment after getting into a fight with her mother, who had asked him to leave.

He choked Shandelle Maycock repeatedly -- ultimately leaving her for dead in a sugar cane field in Palm Beach County.

Several days later, Quatisha was found in the Everglades.

A Miami-Dade police detective testified that Braddy said he left the girl to die because she had seen what he had done to her mother.

Braddy's defense attorney, Terence Lenamon, attempted to chip away at the prosecution's argument by questioning when and how Quatisha died.

He argued she may have suffered the fatal injury when her mother grabbed her and jumped out of Braddy's car.

''We acknowledge that this beautiful child deserves great deference, sympathy, love and respect,'' Lenamon said in his closing arguments, holding a picture of Quatisha.

But he rejected Rifkin's argument that Braddy planned for the child to die, questioning why only one detective in the case testified that Braddy said he had to eliminate the little girl as a witness.

''What makes more sense is he made a horrible mistake,'' Lenamon said.

Lenamon put several of Braddy's family members on the witness stand, including his mother, Pinky Braddy, to testify about how his execution would devastate the family.

''You have the right to say no more killing,'' he pleaded with the jury.

Glick will schedule the sentencing hearing later.
Posted by carie at 4:47 PM