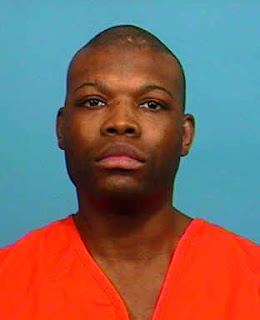 FORT PIERCE — A judge Tuesday described Jimmy Johns' death as a cold, calculated "execution-style slaying," and he decided that the man who shot the longtime auto shop owner in the head during a robbery deserves to lose his own life for it.

Circuit Judge James McCann followed a jury's unanimous recommendation and sentenced 28-year-old Alwyn Tumblin to death for murdering the 67-year-old Johns, a Fort Pierce resident for 30 years. While on Death Row, Tumblin also will serve a life sentence for the armed robbery that led up to the murder, McCann ordered.

After the announcement, two of Johns' stepdaughters said they were pleased with the judge's decision, and the death sentence brings a sort of closure. But, they added, the family will never recover fully from their loss.

"It's over, but it's not," said Johns' stepdaughter Patricia Sanders. "It will probably never really be over for us."

McCann said he weighed several factors in reaching his decision. Those included the fact that Tumblin had been convicted of seven previous violent felonies; the murder was committed during an armed robbery for monetary gain; and it was particularly cold, calculated and premeditated. McCann said the murder "can fairly be characterized as an execution-style slaying" and the robbery was carefully planned in advance.

"The murder of Jimmy Johns was committed without any pretense of moral or legal justification," he said. "The defendant's demands were met with complete and immediate compliance by Mr. Johns, who handed over the money without delay, dispute or comment. Mr. Johns was an unarmed 67-year-old man who posed no threat whatsoever to the defendant prior to being shot."

Johns was working alone, while his employees were out to lunch, inside his business, Jimmy's Auto Clinic on Okeechobee Road, in May 2004. Johns did not resist and handed Tumblin the cash in his pocket, but Tumblin still put a gun to Johns' head, Prosecutors said.

Another man who participated in the robbery told the jury that Tumblin said, "What do you think about this?" before he pulled the trigger.

Tumblin has been involved in the criminal justice system since he was 9 and was convicted of battery of deputies at the courthouse and while in jail.

Retired Assistant State Attorney Lynn Park, who prosecuted the murder case, said the death penalty was appropriate, especially in light of the number of violent crimes Tumblin has been involved in throughout his life.

Tumblin's crimes include a 1998 robbery attempt in which a Fort Pierce resident said Tumblin put a gun to his head. Franklin Scott Sloan, said Tumblin and another man attempted to steal his truck.

When Sloan refused to give Tumblin keys and cash, he said, Tumblin pulled out a gun and fired. Sloan ducked, and he said the bullet traveled through his house and didn't hit anyone.

Tumblin showed no visible reaction when McCann announced his sentence.

His attorney left the courthouse without comment. Tumblin's attorneys have previously said they believe the case has "viable" appellate issues, and the death sentence will be automatically appealed to Florida's supreme court.

Acknowledging the lengthy appellate process, Sanders said she hopes that she is still around to see Tumblin's punishment carried out.

"I wish I could be there to say: 'Tumblin, what do you think about this?,' on his day of judgment," Sanders said.
Posted by carie at 4:21 AM