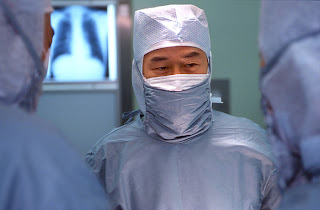 At Florida lethal injections, a man in a purple moon suit leans over the dying inmate to listen for a heartbeat and feel for a pulse. After a few seconds, he nods and an announcement is made to the witnesses that the execution has been completed.

Despite those codes, Florida plans to add more doctors, nurses, phlebotomists (people trained to draw blood) and other medical professionals to its lethal-injection teams -- something that's done in other states.

But death-penalty experts say Florida is the only state that uses a moon suit to shield the doctor's identity -- although some others draw curtains or remove the execution witnesses before the doctor emerges.

The plastic moon suit, similar to those worn by hazardous-materials teams, covers the doctor completely from head to toe. Goggles worn beneath the clear plastic face shield conceals the doctor's identity even further.

"We are a profession dedicated to healing. Participation in an execution is an image of a physician with a dark hood," said Dr. Mark Levine, chairman of the AMA's Council of Ethical and Judicial Affairs.

The AMA and other medical groups can revoke memberships for ethics-code violations, but they have no licensing authority in Florida or elsewhere.

"It is part of the role of a physician, helping people, preserving life and maintaining the trust and respect of the people we serve," Levine said.

The state, however, says the plan's goal is to ensure "a dignified and humane death" for the 381 men now awaiting execution. That includes Mark Dean Schwab, who is scheduled to die Nov. 15 for the 1992 kidnapping, rape and murder of 11-year-old Junny Rios-Martinez.

The state hopes to avoid a repetition of last December's execution of Angel Diaz, who killed a Miami topless-bar manager during a 1979 robbery.

It took 34 minutes for Diaz to die -- more than double the normal time -- because executioners pushed the needles through his veins, causing the poison to collect in his arms and not flow quickly to his heart and lungs.

Earlier this month, Circuit Judge Carven Angel in Ocala rejected the idea that the Diaz case demonstrated how lethal injection was cruel and unusual punishment and therefore unconstitutional. Angel took note of the state's effort to improve its procedures.

"There were irregularities which the Department of Corrections has addressed and taken appropriate action to reduce the risk of happening in the future. The court rejects the argument that the Diaz execution was 'botched.'"the judge wrote.

The Department of Corrections will not comment on its executioners, including whether they include any medical professionals.

Florida has proposed that doctors could be used to insert the intravenous tubes and keep them flowing. They could also examine the inmate to determine any health issues that might hinder the execution or attach and observe the heart monitor. A doctor or pharmacist would be responsible for buying, maintaining and mixing the lethal chemicals.

Department officials told the AP that even though their latest plan allows greater participation, the doctors would still only be used to pronounce death -- although the AMA bars even that.

Gov. Charlie Crist, whose father is a physician, said finding doctors to assist in lethal injections is difficult. Asked how a doctor can ethically participate in an execution after taking a vow to help people, Crist said, "I don't know. It's pretty hard . . . the oath is taken to save life, of course."

The AMA's Levine said doctors participating in executions must decide if they are "an instrument of the state or a member of a profession dedicated to preserving and protecting life. You can't be both."

When prisoners were executed by hanging, electrocution or shooting, there was no need for a doctor to participate except to pronounce death. But in an attempt to make executions more humane -- and make sure they don't violate the constitutional prohibition on cruel and unusual punishment -- 37 of the 38 states that have capital punishment have adopted lethal injection (Nebraska uses the electric chair).

This has many states using doctors and other medical professionals as active participants in executions -- although their roles vary widely.

Some, such as Texas, have the doctor simply pronounce death. But Tennessee allows doctors to cut open an arm or a leg to find a usable vein. North Carolina has a doctor watch a monitor that measures the inmate's level of consciousness. Many use doctors because a court has ordered them to.

"Judges want to know there is somebody there with training, but it is still a controversial area," said Richard Dieter, executive director of the Death Penalty Information Center, a research group that opposes capital punishment.

In any case, most take steps to shield the doctors' identity.

In Missouri, for example, there is a new law that will allow executioners to sue anyone who discloses their identity.

Missouri says that without the law, it would be difficult to find a doctor with an expertise in anesthesia to assist in executions.

In Alabama and Ohio, a curtain is drawn after the execution so the doctor isn't seen by the witnesses.

Bill Allen, a professor of bioethics in the University of Florida's College of Medicine, said he is not sure there is a solution that will satisfy those who want physicians barred from death chambers because "doctors and medical professionals are the best trained to perform the functions to carry out a lethal injection."
Posted by carie at 4:35 AM