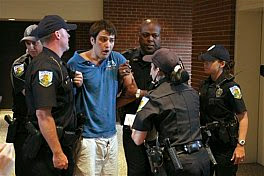 What is happening to America, the land of the free?
CAUGHT ON VIDEO!
These video links below will disgust you. A student asks questions then is dragged away and tasered. This is the end of our great republic unless we take a stand and do something about it. After watching the video call the university and demand the firing of the officers who acted brutally to crush the passion and voice of this student.

WAS HE RESISTING AN ARREST?
WHAT WAS HE BEING ARRESTED FOR IN THE FIRST PLACE?
A law suit will be interesting!

Please call to express your concerns about this horrible incident:

Forward this to everyone you know.

The young man in the AP video below did nothing wrong. He is, however, tasered and arrested. Random acts of police abuse are rising. Their true purpose is not to thwart a crime. The true purpose of the violence is to set an example. Its purpose is to intimidate or terrorize both the American citizenry into docile compliance.

This is all made worse by the fact that there is a chance that this man might be imprisoned and never be given a trial. Via executive order Americans have lost their gaurantee to trial. A police state is evolving rapidly. A while back two border patrol agents were arrested to set an example to all border agents to not enforce the border. The logic is similar.

It is time to wake up before it is just too late.

And, by the way, the young man's question about Skull and Bones are legitimate. Tim Russert of NBC did a story making it clear that both Kerry and Bush were members of this secret society.

The poll, itself, can be viewed as a trial balloon, whereby this nation's insiders or establishment can gauge Americans' interest or lack thereof. Please reply to todays AOL poll to let them know that excessive force is not acceptable. Go to www.aol.com to vote.

Student Arrested, Tasered at Kerry Event
AP
Posted: 2007-09-18 10:12:19
Filed Under: Crime News, Nation News, Politics News
GAINESVILLE, Fla. (Sept. 18) - A University of Florida student was Tasered and arrested after trying to ask U.S. Senator John Kerry about the 2004 election and other subjects during a campus forum.

A University of Florida student struggles with university police as officers try to remove him from a question-and-answer session with Sen. John Kerry, D-Mass. The student was Tasered and arrested.

Videos of the incident posted on several Web sites show officers pulling Andrew Meyer, 21, away from the microphone after he asks Kerry about impeaching President Bush and whether he and Bush were both members of the secret society Skull and Bones at Yale University.

"He apparently asked several questions -- he went on for quite awhile -- then he was asked to stop," university spokesman Steve Orlando said. "He had used his allotted time. His microphone was cut off, then he became upset."

As two officers take Meyer by the arms, Kerry, D-Mass., is heard to say, "That's alright, let me answer his question." Audience members applaud, and Meyer struggles to escape for several seconds as up to four officers try to remove him from the room.

Meyer screams for help and asks "What did I do?" as he tries to break away from officers. He is forced to the ground and officers order him to stop resisting. Meyer says he will walk out if the officers let him go.

As Kerry tells the audience he will answer the student's "very important question," Meyer struggles on the ground and yells at the officers to release him, crying out, "Don't Tase me, bro," just before he is Tasered. He is then led from the room, screaming, "What did I do?"

Meyer was charged with resisting an officer and disturbing the peace, according to Alachua County jail records. Meyer was scheduled to appear in court Tuesday morning, a jail official said.

It was not known if Meyer had an attorney.

"The police department does have a standard procedure for when they use force, including when they use a Taser," Orlando said. "That is what the internal investigation would address -- whether the proper procedures were followed, whether the officers acted appropriately." Copyright 2007 The Associated Press. The information contained in the AP news report may not be published, broadcast, rewritten or otherwise distributed without the prior written authority of The Associated Press. All active hyperlinks have been inserted by AOL.
2007-09-18 06:36:09

Another similar incident of police torture using tasers:
UCLA Student Tasered by Police in Library
http://www.youtube.com/watch?v=5g7zlJx9u2E&mode=related&search=
Posted by carie at 2:27 AM