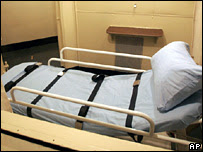 A judge in Tennessee has ruled the state's method of executing prisoners by lethal injection is illegal because it is a cruel and unusual punishment.

Federal judge Aleta Trauger said inmates were not properly anesthetised before the injection was administered.

This presented a "substantial risk of unnecessary pain" to inmates and violated their constitutional rights.

Tennessee is among 11 states in which executions have been postponed or blocked over concerns about injections.

Judge Trauger was presiding over the case of Edward Jerome Harbison, due to be executed next week for murdering a woman in 1983.

Tennessee reviewed its lethal injection procedures in April, but the judge said by failing to safeguard prisoners against pain, the new protocol could "result in a terrifying, excruciating death".

Harbison could be legally executed once the state adopted a valid method of execution, she said.

The state attorney's office is said to be considering whether to appeal against the ruling.

Lethal injection is the main method of judicial execution in the US.

An autopsy showed the death row inmate took close to 35 minutes to die, apparently in great pain, after the first injections were administered wrongly.

New protocols have been issued, and the state's governor has since signed a death warrant for a death row prisoner.

The governor of California, Arnold Schwarzenegger, also ordered a complete review of the state's death penalty programme following a court ruling there.