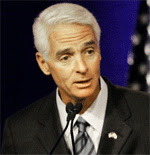 Earlier this summer, Governor Charlie Crist put the state government on notice: every department would have to find 10% of its budget to cut to make up for the state’s sagging tax rolls.

"So we had to provide $70 million dollars in savings to propose to the governor," says Dan Rodgers, chief probation officer for the Treasure Coast.

The Secretary of Florida's Department of Juvenile Justice says he will try to "minimize impact on public safety," but warns the cuts will be "substantial."

On the proposed chopping block: 7 juvenile detention centers, including the 78-bed facility in Ft. Pierce that serves the entire Treasure Coast. Officials who work and operate the center say losing it would cause a lot of problems.

"It would be a logistical nightmare," says Rodgers.

The biggest problem, they say, is transportation. Without the St. Lucie County facility, officers would have to transport kids to the nearest detention facility: 60 miles to the south in Palm Beach

County or 90 miles to the north in Brevard County, every time a child is arrested and every time one has to go to court.

Godwin says he's in the process of adding up how much it would cost lawyers and deputies and ultimately taxpayers to make all those additional trips. He says it will be big.

"It’s going to be a huge impact and unfortunately it’s another unfunded state mandate that the county residents would have to pick up," says Godwin.

Closing the St. Lucie facility will also cause crowding issues at the Palm Beach Regional Juvenile Dentention Center, as both places are already at or above their capacity.

The Florida legislature will consider the proposed budget cuts, including this one, at its special session, starting September 18th.
Posted by carie at 7:17 AM