US Supreme Court to examine legality of lethal injections 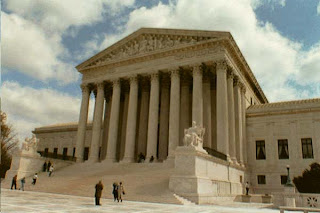 WASHINGTON (AFP) — In a move which could slow the rate of US executions, the Supreme Court agreed Tuesday to consider the constitutionality of lethal injections used in almost all the country's death penalty cases.

Amid growing controversy over exactly how lethal injections are administered, the court said it would examine the cases of two men condemned to death in the Southern state of Kentucky.

"It affects virtually everyone on death row," said Richard Dieter, director of the Death Penalty Information Center, who stressed, however, that the court is unlikely to end capital punishment.

"It may be all about a slowdown," he said. "For the next six months or so, we may have executions on hold."

But despite the announcement, authorities in Texas said they planned to go ahead and administer a lethal injection later Tuesday to Michael Richard, 48, sentenced to death for raping and killing a mother of seven children in 1986.

"Some countries may hesitate to execute right now, but we're not a country where departments of corrections wait unless they have to."

Rights activists argue that lethal injections are often slow and painful and contradict the constitution's ban on "cruel and unusual punishment."

So far this year, 40 of the 41 people executed in the country have been killed by lethal injection, with one choosing the electric chair. In 2006, there were 53 executions in the United States, all but one through lethal injection.

During an execution, three drugs are administered to the condemned person: one to sedate him, one to paralyze him, and one to stop the heart.

However, there is no national protocol for administering the drugs and it is not always done by a medical professional. While the prisoner may appear calm, several studies and botched executions have shown that death may in fact be prolonged and quite painful.

A 2005 study showed only small amounts of sedatives in the bodies of the condemned, leaving open the possibility that they were awake when the other two medications were injected.

In Florida in December, Angel Nieves Diaz, his eyes wide open, grimaced and shook for more than 30 minutes before finally suffering convulsions and dying.

Authorities later found that the needles were inserted too far and the lethal cocktail was injected outside his veins.

Dieter said instead of ordering an end to executions, the Supreme Court is likely to set a minimum standard.

"I don't think the US Supreme Court is about to eliminate the death penalty with this decision," he said. "I think they're going to say what the standards are for lethal injection."

The high court has never ruled on a particular method of execution. Instead, under legal challenge, states that used gas chambers, hanging or electric chairs switched to lethal injection.

"Now the states don't have another method of execution to turn to," said Deborah Denno, professor at Fordham University in New York.

Although the court has refused to consider several similar appeals in recent years, a hearing is expected in early 2008.
Posted by carie at 7:59 AM