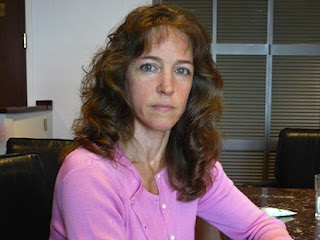 The ex-astronaut could remove the ankle device because she has followed rules since her arrest.

Former astronaut Lisa Nowak now is able to swim with her kids, lace up her Navy uniform boot and exercise -- all without the hassles of wearing a global-positioning device strapped to her ankle.

The Navy captain, accused of attacking her romantic rival at Orlando International Airport, complained that the half-pound monitor got in the way of her lifestyle.

On Thursday, Orange Circuit Court Judge Marc Lubet granted Nowak's request to remove the device that cost her $105 a week and tracked her anywhere in the world. It was removed from her leg by the end of the day, said an official involved in the monitoring.

During a hearing Aug. 24, Nowak told the judge that when batteries for the device ran low, she had only one to two minutes to change them before a loud siren sounded. A telephone call would follow from the monitoring station.

"It's a great relief not to worry about safety issues related to the batteries' life while I'm driving," Nowak, 44, said in a statement released Thursday afternoon by her attorney's spokeswoman. "I'm also really looking forward to getting back into my former aerobic fitness programs."

But the judge did not free her for the reasons listed in Nowak's request.

Lubet pointed out that Nowak, who has no prior criminal record, had not violated any conditions of her release since being freed from the Orange County Jail seven months ago.

She has been allowed to travel anywhere in the country other than Brevard County. That's the home of Nowak's alleged victim, Air Force Capt. Colleen Shipman.

Shipman, 30, stated during the hearing last week that she feared Nowak and felt "comforted" knowing her former rival was constantly monitored.

Yet Shipman testified that she had traveled several times to Houston -- where Nowak lives -- to visit her boyfriend, Bill Oefelein, 42. The Navy commander, Nowak's former love interest, also was an astronaut at the time of her arrest.

"It is clear to this court that the electronic monitoring GPS device does not fulfill its intended purpose of protecting Ms. Shipman," Lubet wrote in the six-page ruling.

Earlier this week, legal notice of Nowak's intent to rely on an insanity defense became public.

Shipman's attorneys Thursday released a statement saying they were disappointed in Lubet's decision, especially in light of the recent insanity notice.

"At some point, the rights of the victim to feel safe in her own home should be given significant weight," the statement said. "In our opinion, justice requires that Lisa Nowak's aerobic fitness should not override Colleen Shipman's peace of mind."

Nowak, a mission specialist on shuttle Discovery's flight in July 2006, was charged with attempted kidnapping of Shipman and burglary with assault, which is punishable by up to life in prison. She also was charged with misdemeanor battery.

She is accused of driving alone from Houston to Orlando International Airport to confront Shipman in a dark parking lot.

In his order, Lubet set additional restrictions that Nowak must follow.

She can't have any contact with Shipman and Oefelein -- other than through their attorneys.

Nowak can't travel to the District of Columbia, Maryland, Delaware or Virginia -- where Oefelein now lives -- without getting approval from the court first.

She can't go to Florida without court approval for any reason other than to make court appearances, meet with her attorney or perform military duties.

Nowak also must notify Shipman's lawyers of the dates she will be in Florida. If she violates these conditions, the former astronaut faces more than court consequences.

Lubet spoke to Nowak's commanding officer, who will issue a formal military order incorporating the new rules. If she violates them, she will be subject to discipline under the Uniform Code of Military Justice.

Lubet has not ruled on two other motions discussed at the Aug. 24 hearing. Nowak's attorney, Donald Lykkebak, is trying to get her statements to the police and the items seized from her car tossed out as evidence if the case goes to trial.